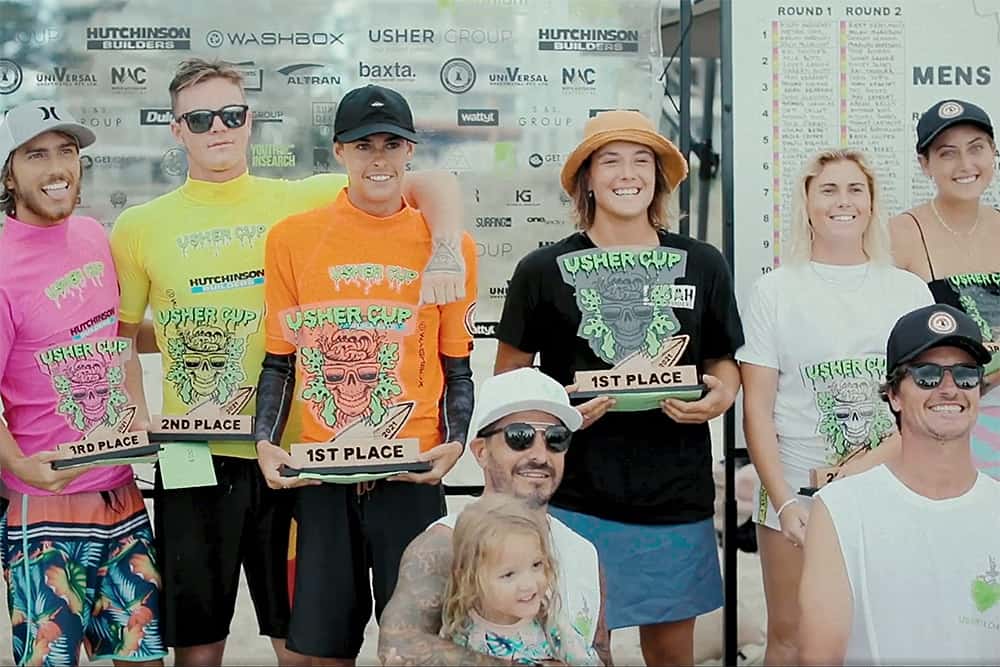 They were last minute entrants, who originally declined an invitation to participate in the inaugural, Usher Cup surf contest on the Gold Coast, however the trip certainly proved to be a valuable one for the Angourie Boardriders who claimed two of the three major trophies on offer as the three-day surf contest, which delivered equal prize money for male and female competitors drew to a close in good conditions at Rainbow Bay this afternoon. The final day of the Usher Cup saw the completion of the men’s heats with the sixteen top contest surfers progressing through to the quarter finals.

The talent stacked finals provided perfect spectator viewing as those vying for the five-thousand-dollar prize purse traded high scoring rides. Former World Championship tour surfer Dean “Dingo” Morrison was eliminated in a heat stacked with surf stars of the future. Reef Hazelwood, Chriss Zaffis progressing through to the semi-finals following the first quarter final battle. A contest wildcard, Jaggar Bartholomew dominated his quarter final battle to progress along with Brent Savage, while Angourie’s Dakota Walters and Dexter Muskens progressed from quarter final three. Alister Reginato then put his competitors on notice, scoring the highest heat score of the finals and progressing with a score of 16.27, while Liam Obrien secured the final spot in the semi’s.

The competition seemed to lift a level as the surfers returned to the water for the semi-finals, Reef Hazelwood and Jaggar Bartholomew traded scoring barbs during the first semi with Hazelwood progressing in first place. Dakota Walters and Liam O’Brien dominated the second semi, earning a crack at the $5000 winner’s prize.

From the outset of the final, Dakota Walters and Jaggar Bartholomew had the crowd and commentators on the beach in awe, Dakota establishing a strong lead before the son of Australian surfing legend and contest Director Wayne “Rabbit” Bartholomew struck back with a display of power surfing and pure determination. With only seconds left on the clock, Jaggar needing a score of 7.4 to claim top spot, the Usher Cup Wildcard set off on a long wave, turning in a performance which most on the beach thought would have been enough to secure the title. The nineteen-year-old left exhausted and just point two of a point shy of the title as the judges awarded him a 7.2 for the final ride of the contest. The Angourie pocket rocket Dakota Walters claiming the first Ever Usher Cup title with a score of 15.43 Jaggar Bartholomew finishing in second with 15.27 points.
Third place was taken by Reef Hazelwood with 12.40, O’Brien claiming 4th position with 11.43.

Refreshed after a day’s rest, the standard of women’s surfing continued from where it had finished on Friday with the Usher Cup women’s final one of the most entertaining heats of the three-day event. From the moment the athletes hit the water, they the four top surfers were locked in a frantic scoring battle, with the decider going down to the wire. With just 56 seconds to remaining on the contest clock, the top three surfers were all locked on the same points, before Audrey Styman-Lane managed to edge out her rivals with a class ride to secure the Usher Cup women’s title. Styman-Lane finished with 13.90. ahead of second placed Dimity Stoyle on 12.97, third went to Kobie Enright on12.87 with Jade wheatley claiming 4th.
It was Audrey Styman-Lane’s first competitive surf in 6 years and the Duranbah competitor promptly announced her return to competitive hibernation at the presentation ceremony.

Contest Director, Wayne ‘Rabbit’ Bartholomew is thrilled with the event.

“I had every confidence that this contest would be a huge success, and to say we are absolutely thrilled with the result would be a massive understatement. The standard of surfing in both the men’s and the women’s was just epic and we have certainly put the spotlight on some amazing young challengers, that we are absolutely certain will be pushing for spots on the tour in the not too distant future.” We asked Usher Group Managing Director Theodore Vairaktaris about his thoughts on the inaugural event.

“I can’t even describe how I’m feeling right now. I’m so proud, stoked, thankful, humble – just everything at once. The emotions are just oozing through me at the moment. Just a complete success, we’ve had pumping waves, awesome weather, just the vibe and the atmosphere of the event is just so epic! I can’t believe it’s open, I sort of want it to keep going I can’t believe it’s over because it was such an epic weekend.”

Away from the surf, the Usher Cup had significant Charitable targets to achieve.

“That was our goal to try and reach $60,000, we were a bit iffy if we would be able to do it, especially the time we are in because of COVID. However, the construction industry spoke, the community spoke, and they have supported us. It’s amazing that my colleagues and fellow friends that I’ve been working with and grown up with, running the Usher Group for 20 years now, I definitely wouldn’t be where I am without them. They have just come out like a tidal wave and look out what they’ve done. They have believed in Usher Love and Usher’s vision and we delivered!”

The Usher Cup also made a significant statement, by presenting equal prize money for both the mens and women’s winners.

“It’s huge that we’ve have done equal prize money! It means so much to me that we have, not only equal prize money, but equal depth in the comps as well. We wanted really strong women present and, to be honest, they were ripping. That first day of the competition, they were on fire! They were surfing so amazing, hats off to them. It’s a real different vibe when they’re surfing as well, there’s more love in the air. Then the guys get here, and they get all competitive.”

Theodore saying the finals held in near great conditions at Rainbow Bay, provided the perfect finish to an epic contest.

“Those finals were world class finals. Not only did we have world class competitors here today, that would potentially be the next world champs there’s no doubt in my mind, but those finals were so close right up until the last minute, so it was pretty full on.” So what’s next for the Usher Cup contest?

“2022 we are back and bigger and ever! We have so much support pledged to us already from the industry and the community. Snapper Rocks will be backing us again. We have numerous sponsors get back to us and tell us and say 100% lock us in. Not only that, but we have had heaps of clubs get to us that want to participate next year and my answer to them is bring it on!”

ABOUT THE USHER GROUP AND USHER CUP
Founded in 2001, Gold Coast Business of the Year, Usher Group is a leading national trade services provider to the construction and commercial sector.
Managing Director, Theodore Vairaktaris has always provided mentorship, guidance and support to youth on the Gold Coast and the Usher Cup is a remarkable extension of this support.
The Usher Cup will also support the Usher Love charities; The Perry Cross Foundation, Youth Insearch, Camp Quality and Starlight Foundation.
For nearly 20 years, Usher Love, in association with the Usher Group, has been committed to having a positive influence and making a difference within the communities in which they operate.

Through Managing Director, Theodore Vairaktaris, Usher Group is also committed to fostering emerging talent, which led to the establishment of the Usher Cup, a contest aimed at assisting in the development of grass roots surfing.

What is even more remarkable is the level of support for the event from the Trades, Painting and Construction Industries, here on the Gold Coast and nationally.

Theodore Vairaktaris says, “I am overwhelmed from the support of the construction industry towards Usher’s initiatives.”
“The Usher Love vehicle has been supporting the community for 19 years and I am so passionate about growing it beyond belief, Having the sponsorship sold out in less than three hours is a true testimony that the industry believes our vision and stands with our passion for supporting grass roots clubs and charities.” He adds.