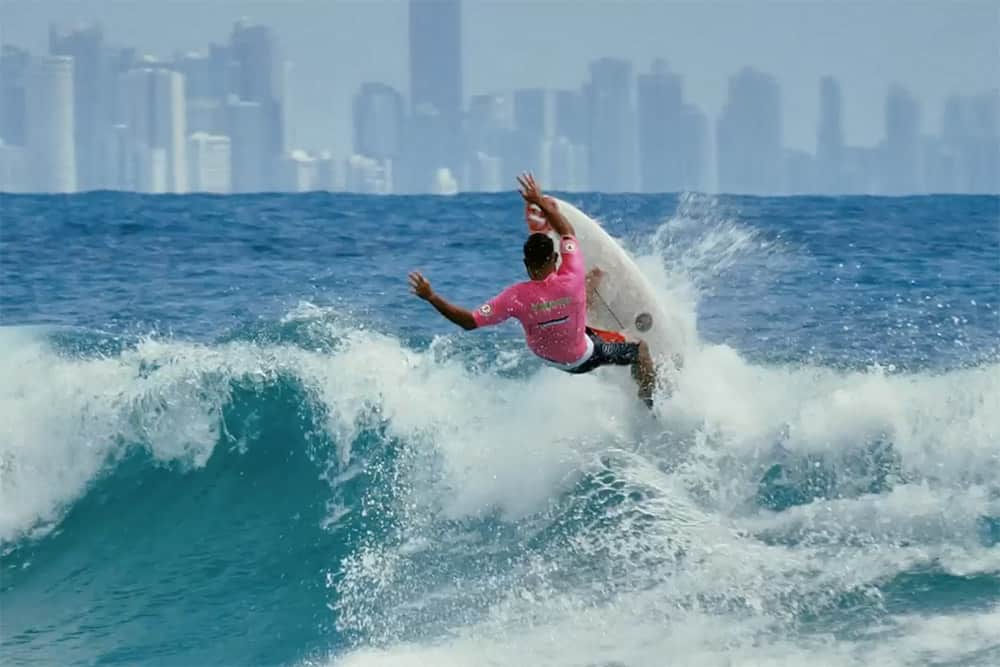 The brainchild of Usher Group Managing Director Theodore Vairaktaris and surfing’s Godfather Wayne “Rabbit” Bartholomew, the Usher Cup was created in an effort to lift the status and profile of grass roots surfing and to provide a platform for the sports emerging stars to show their talents.

Today, as the competitions heats concluded and surviving competitors prepared for the finals, the contest Director was hailed the inaugural contest a huge success.

“Well I always thought that round three would be a phenomenal round and it has proven to be that, we’ve got all the top seeds still in the tournament pretty much and we have got all these young guys that are just coming onto the scene in a big way, these nineteen, twenty year old guys that are challenging in a huge way”

“Reef Hazelwood’s still in there, Mitch Parkinson, Liam O’Brien just won his heat, they are the big guns, but then we have got these young guys Mikey McDonagh, and Alister Reginalto, there’s a whole layer of them”

While Wayne wouldn’t be drawn on the chances of son and inform Wildcard Jaggar Bartholomew, the Snapper Rocks Board Club rider was doing his own talking in the water, overcoming a bout of heat stroke to win through to the quarter finals.

“I was too relaxed yesterday, even though I woke up this morning feeling not that good, I had a coffee and it kind of saved me, so I just want to go into a heat with a little bit more aggression instead of being too relaxed and get drowsy, so just keep my mind sharp and my body sharp”

“I just want to keep going out there and keep cool and keep feeling good and keep my mind sharp, I am just going to go home and relax and then come back for my next heat”

While Jagger put his feat up, former world tour competitor Dean Morrison was paddling out for his second heat of the contest, up against a trio of motivated and inform youngsters.

“I know, I really enjoy competing against them, you know I haven’t competed that much over the last decade, but you know when I pull a jersey on, I get to have fun and all them feelings come back”

The high tide meant opportunities were few and far between, wave selection proving to be the difference.

“I knew I needed a wave, I have been competing that long that without even hearing the scores, you can kind of feel the situation you are in and I knew I had one ok score, I just kind of needed one really good one. I didn’t really get a good one, but I got two mid-range scores”

Following the men’s quarter and semi-final rounds, the women’s final will be decided with Bartholomew expecting another huge contest in potentially the best waves of the day.

“Oh yeah the women out in the final, surfing for five thousand dollars and it’s going to be a great final, I mean they are on the main stage on finals day and they have really deserved their spot, I mean those four girls on Friday, the surf was sensational”