Just a Few Microns Away From Curing Paralysis 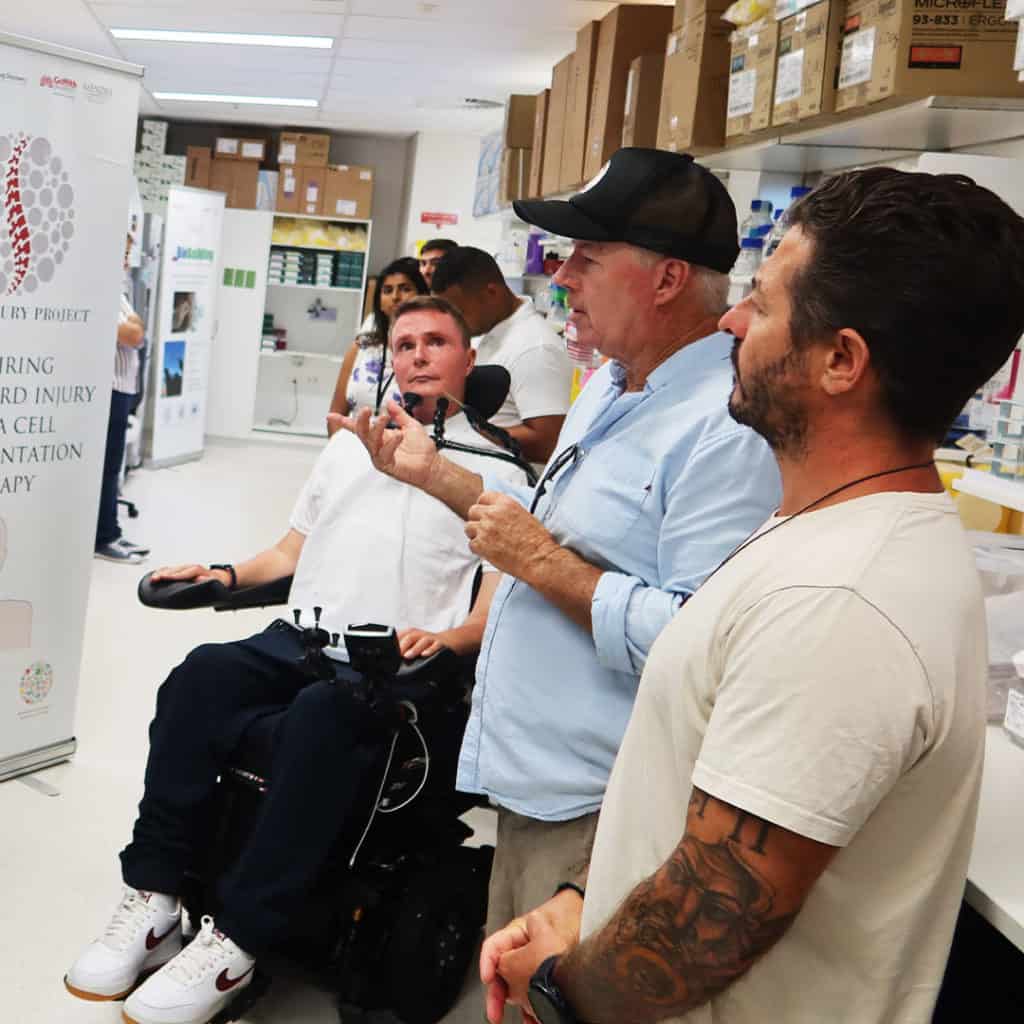 Spinal Cord Injuries (SCI) are more common than you might think, with approximately 15,000 Australians living with an SCI.

SCI injuries are most commonly caused as a result of motor vehicle accidents, whilst sporting accidents also result in athletes around the world suffering injuries resulting in quadriplegia or paraplegia.

Twenty-six years ago, a rugby accident left promising sportsman, Perry Cross with a severe spinal injury, leaving him a C2 ventilated quadriplegic. It was a life threatening and changing moment. Rather than giving into his disability, Perry decided to dedicate his life to making a positive difference in the lives of others living with SCI injuries.

In 2010, the Perry Cross Spinal Research Foundation was established with Perry emerging as a leading advocate in calling for greater research into spinal injuries and a possible cure. Perry travelled the world as an inspiring motivational speaker.

Perry’s ultimate goal and vision is to cure paralysis, however there are other crucial steps, including restoring physical movement, recovering feeling and autonomic functions. Inspired by legendary Hollywood actor Christopher Reeve, who sustained a similar injury, Perry was determined to ehance the way SCI treatment and rehabilitation was provided in Australia.

Currently, Australian’s with chronic SCI injuries have limited access to activity-based therapy (ABT) as it is not regarded as a standard care of practice. Recognising the importance of accessible ABT and the continued search and research into finding a paralysis cure, The Perry Cross Foundation has since raised over $12million dollars.

A team of thirty work in the Perry Cross research laboratory located within the Clinical Science Building (G40) at the Griffith University Campus on the Gold Coast.

In 2012, the Usher Group painted building G40, making this partnership extra special. “The last time I was there was when I did the handover, so it was really cool for me to go there after all these years because I hadn’t seen the building since then,” said Theodore. “When I was walking around on Tuesday it was giving me all these memories, it looks epic!” he said. “I’m so glad they are using the building for such impressive and ground-breaking research and I’m excited to be supporting Perry.”

Inside the laboratory, the PCF scientists have already achieved extremely promising results including significantly reducing SCI injuries in mice. They are now working on the next step of the study which is an Intensive rehabilitation trial consisting of a clinical treatment trial on up to 15 participants.

CL Prof James St John manages the research team and outlined how driven the scientists are to perfect their treatment with the laboratories state-of-the-art technology. “We were awarded the National Health and Medical Research Council’s Marshall and Warren ‘Innovation Award’ which is a prestigious award that shows how we are at the forefront of technology,” said CL Prof St John.

The treatment planned for the Intensive rehabilitation trial is an enhanced version of a previously proven technique. The treatment involves the transplanting of olfactory ensheathing cells (OECs) from the nose which are then isolated and purified. The team then create a nerve bridge which is implanted into the patient’s spinal cord in an effort to regenerate cellular damage.

Lead researcher, Dr Mo Chen, impressed Theodore and Wayne Bartholomew with work produced using a 3D printer with the ability to print 10,000 cells every second. Within a few minutes, Dr Chen had printed an incredible 10 million cells in front of the Usher team, all successfully turned into prototype nerve bridges. Multiple shapes were created and scaled to real life human cells. “Potentially, this sort of technology can be transplanted into someone’s shoulder and regrow and regenerate their shoulder to fix the injury,” Perry Cross said.

Theodore and Wayne also gazed into an advanced microscopic lens that can see up to 2 Microns in length (500x smaller than one grain of sand)! “The microscopes allow us to generate a lot more data in less time. So, something that would typically take months to study, only takes a few days,” said Perry Cross Spinal Researcher.

The Perry Cross Foundation have so far raised over $450,000 for the Intensive rehabilitation trial but are still in need of a further $916,000 for 10 additional participants. The Usher Cup’s donation will cover an amazing 70 hours of rehabilitation for one person during the trial and will also cover the transportation costs for the participant and their dedicated carer.

The aim is to begin the trial this year, signalling the start of an extremely exciting time for Australian’s living with SCI. Once successfully completed, the next step will be a Human Clinical Trial which is the ultimate goal for the Perry Cross foundation team. Whether you realise it or not, curing paralysis will benefit all Australian’s as it will save the economy billions of dollars a year. In fact, if the planned Intensive rehabilitation trial can improve outcomes by 20% for 20% of Australian’s with SCI, then at least $800 million will be saved each decade.