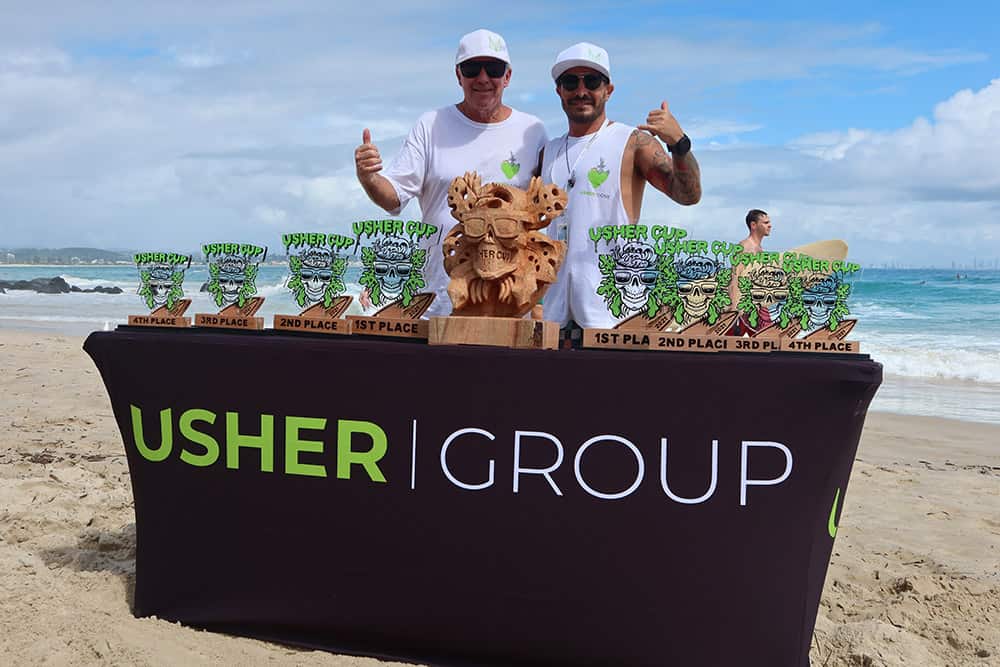 It’s hard to believe it’s nearly been a year already, however the Usher Cup is back for its second instalment and we’re super excited at how the event is building! Registrations are now open and preparations are well underway for an epic three-day surf competition, once again set to be held at the iconic Snapper Rocks from Friday 28th to Sunday 30th January.

For those joining us for the first time, the inaugural Usher Cup- a unique grassroots surf contest- was held from 28th – 31st January 2021, with the event attracting competitors from 19 Boardrider Clubs, stretching from Angourie in the south to Noosa Heads in the north.

The inaugural Usher Cup came at a crucial period for the grassroots level sport, and for the southern Gold Coast community, which much like the rest of the country, had been struggling through a COVID-19 enforced hibernation. The Usher Cup provided competitive surfing with a much needed heart starter whilst also providing a significant economic boost to local businesses who flourished during the event.

While we were stoked with year one, we’re really stepping things up as we prepare for year two! Our goal is to build on the success of the inaugural event and deliver a unique hybrid surfing comp which unites and lifts the status of grassroots club surfing whilst also providing greater exposure for everyone involved. The Usher Cup provides a genuine platform and pathway for the sports emerging stars and importantly, awards equal prize money to male and female surfers.

In 2022 we’re stoked to announce that winners in both the men’s and women’s events will leave the beach $7,000 dollars richer, while a prize pool of $73,400 will be distributed amongst surfers right down to last place.

After an overwhelming response and Interest from clubs across Queensland and Australia, we’re increasing the number of participants for 2022 too, inviting some of the countries most established board riding clubs to join us on the Gold Coast in January. Keep your eye on the news to find out who’s coming!!

In other news, Usher Cup will continue its charity drive, and we are pleased to announce the launch of our Gold Coast $10K for TEN sponsorship campaign. This will see the Usher Cup donating $100,000 across ten Gold Coast based charities, with an extra $10,000 being donated to the winning club’s charity of choice.

In year two, an incredible $110,000 will be donated directly to charity and we are so excited about the impact this will have on the South East Queensland community and the lives it will help change.

As founders and organisers of the Usher cup, we welcome you wholeheartedly to the Usher Cup family and hope you will join us for this unique surfing event.

There’s plenty install so keep an eye on the news and socials as we reveal participating clubs, returning winners and judges, and everything in between!